In change management, we often talk about process, but rarely about emotions. Let’s talk about 3 emotional enemies to change management: Fear, Cynicism and Indifference. If you’ve attended workshops and meetings announcing acquisitions, mergers, reorganizations, or the introduction of new tools and processes, you know how you and the people next to you felt. That inner monologue may have sounded a bit like this:

“Oh boy, here comes another useless episode of change brought to you by the changemakers.”

I’ve had to sit through a few of those myself. One acquisition. One merger. Several reorganizations. And I can absolutely sympathize with feeling cynical and indifferent. I’ve also seen fear in the eyes of colleagues who, in earnest,  asked the following question during an announcement about a merger and office move:

“Do we get to keep the same chairs and trash cans in the new office?”

So, let’s talk about 3 enemies of change management: Fear, Cynicism and Indifference.

An unpleasant emotion caused by the threat of danger, pain, or harm.

Fear is a normal human reaction. When it comes to change as it relates to organizations and processes, fear can manifest itself in several ways, including:

A lot of this fear rests on the apprehension of having to face issues alone or without a way to overcome them. The antidote is to make it clear to everyone that all upcoming changes are a team challenge and not an individual burden.

Substitute the fear of facing problems alone with a team commitment to help and support every team member into overcoming all challenges brought on by change. And ensure that no one in the team will rest until every member of the team has been able to overcome their challenges.

Ensuring that “No man or woman is left behind” is a bit cliché, but it is a good way to phrase it. 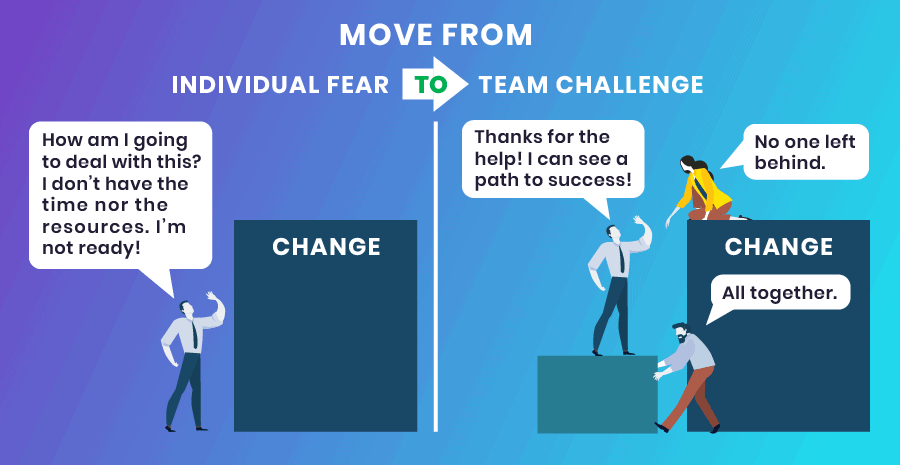 An inclination to question whether something will happen or whether it is worthwhile; pessimism.

Facing change, you may have thought or heard something like this:

“This reorganization is useless.”

“Why are they doing this?”

“One software or another, who cares?”

That’s what cynicism sounds like and we’ve all had these thoughts at one point or another, especially if you’ve worked in the same office for any significant period of time.

It’s a normal attitude, often based on having experienced change that doesn’t add value, or is not perceived as adding value.

The issue is that cynicism can be contagious and demoralize team members that are affected by the change or trying to lead successful change.

Antidote: Believe in the Intent, Not the Change, and Expand Your Field of Vision

There are two antidotes to cynicism…

First, while some may not view the change as relevant, beneficial, or well designed,you must raise awareness of the fact that people – teammates in the same organization – have been working on that change. And that like most people in any organization, the people who planned the change: 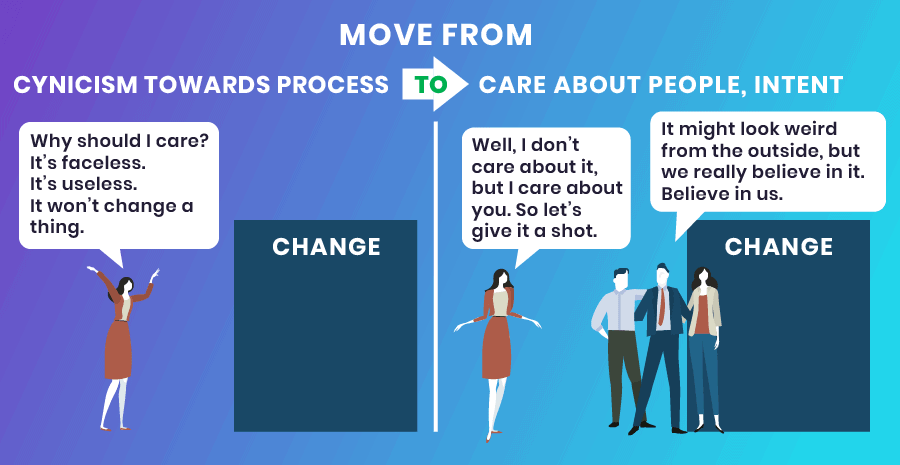 This is a little exercise in empathy during which you encourage teammates (cynical or not) to put themselves in the shoes of someone who’s been given a mandate to change or improve something within the company. Once in those shoes, they would certainly hope for their colleagues to give them a minimum amount of support and benefit of the doubt. Once they understand the position of the other, it becomes much easier to ask them to give what they would like to receive in the same situation.

Second, raise awareness about having a wider perspective, meaning that although they may not see the usefulness of the change in their current day-to-day, this doesn’t mean that other teams, departments, and customers won’t see the value of it, whether it is now or in the future. 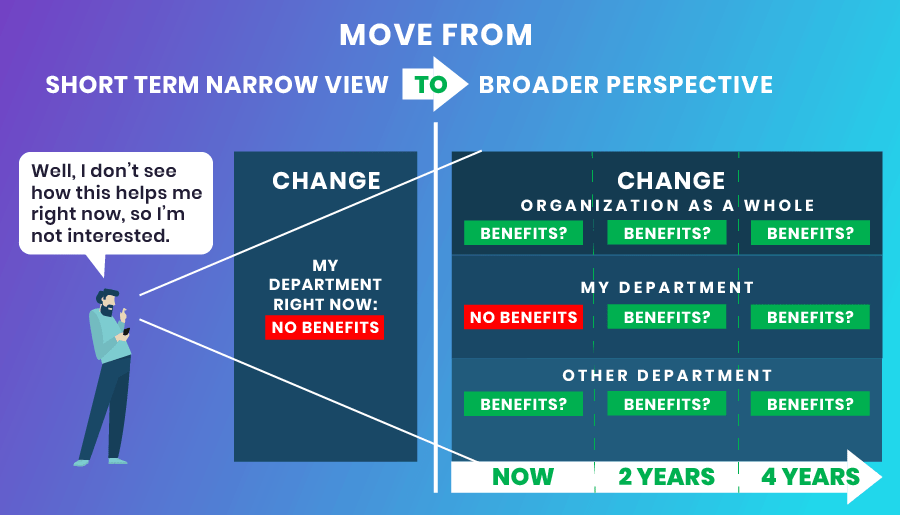 Lack of interest, concern, or sympathy.

Indifference will be felt by people or teams that think the change won’t affect them and therefore don’t want to hear about it and don’t want to participate in it.

This can be especially detrimental to a company when one team or department is leading a change that needs the help of other teams or departments who are indifferent to the project.

Imagine that a change project is lead by one team, let’s use Sales as an example, but it needs the participation of  Marketing, IT, and Operations, who are all indifferent to the project.

This would make the work of the Sales team extremely difficult. Not fun.

The antidote to indifference, much like the ones to fear and cynicism, is built around the concept of the team.

An employee can be, or may want to be, indifferent to an organizational or process change led by another department. After all, the change is not being led by their boss, so who cares, right?

By focusing on the change itself and the chain of command, we forget that there are people involved. They may not be in our department, they may not be our bosses, but they still need our help.

So instead of seeing it as:

“Some other department has been tasked to change the process, why should I care?”

Try to see it through a much simpler, yet more fundamental and human lens:

“There are people in my organization who are part of our larger team and who need my help.”

If everyone’s thinking is in line with the former statement and no one appears to be able to transition to the latter way of seeing change, you then have a much bigger problem than change management; you have a company culture problem. 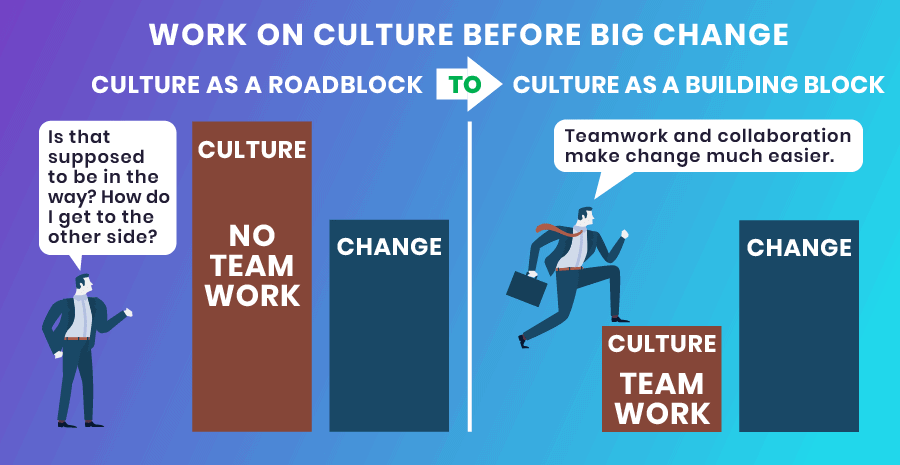 If your company culture has resulted in departments not wanting or caring to help each other, you should focus on that first, before initiating change management.

You could, for example, work on team building for a few weeks in order to bring the different teams and departments a bit closer together on a  human level.

Once that is done, you can start working on change management, knowing that cooperation between teams and departments will happen more naturally or, at the very least, will not be faced with insurmountable resistance.